Calibration of various audio channels in any CONVERGE Pro 2 (CP2) system is essential to the proper functioning of all audio processing throughout a system, especially to echo cancellation processing. A poorly calibrated system can result in echo on the far end of a teleconference call and choppy audio into the conference room even when other settings are correct. It can also cause problems like audio distortion, poor mic auto gating, and poor Automatic Level Control (ALC).

NOTE: Voice lift should be disabled to prevent feedback while mic inputs are being calibrated.

1 Nominal level is the operating level at which an electronic signal processing device is designed to operate. The electronic circuits that make up such equipment are limited in the maximum signal they can output and the low-level internally generated electronic noise they add to the signal. The difference between the internal noise and the maximum output level is the device’s dynamic range. When a signal is chained improperly through many devices, the dynamic range of the signal is reduced. The nominal level is the level that these devices were designed to operate at, for best dynamic range and adequate headroom. (Source: Wikipedia, https://en.wikipedia.org/wiki/Nominal_level

It is important to calibrate the external amplifier after all channels in the CP2 system have been optimized, but before voice lift has been configured. Be sure to avoid lowering the Telco or VoIP RX levels at the input, at crosspoints, on busses or at the line outputs and then turning up an external amplifier to achieve good room audio levels. This alone can cause far end echo even when all other settings are correct. Keep the Telco and VoIP RX at a nominal level and adjust the external amplifier as needed to achieve good room audio levels.

1.Under Channel Properties, select the mic input that you want to optimize, as shown below.

3. Adjust the coarse gain slider until the peaks on the post gain meter are close to +6dB (just hitting yellow), and the average level is close to 0dB.

4. Adjust the (fine) gain slider until the peaks on the post gain meter are as close to +6dB and average level to 0dB as possible.

5. Repeat the above steps for each mic input in the venue.

»» NOTE: The post gain meter is a peak meter. If it peaks into the red, clipping occurs, resulting in audio distortion. If the meter remains green, the level may be too low. This approach to gain structure should be followed on all channels throughout a CONVERGE Pro 2 system, except when noted below. Also note that it is better to err on the side of audio that is a little low rather than audio that is too hot on mic inputs.

1. On a properly configured phone line, the receive input meter should show optimal levels (+6dB). If levels are too low, increase receive boost as needed.

2. Adjust the gain slider as needed to ensure that the post gain meter shows optimal levels (+6dB) as well.

3. The Telco RX should maintain this same level throughout the CP2 site up to and including the line output(s) to an external amplifier and speaker system. See section above, “CALIBRATING AN EXTERNAL AMPLIFIER.”

The same principles of gain structure apply to the Telco and VoIP TX channels. When someone talks on a microphone in a CP2 system, the Telco TX post gain meter should show the same levels as recommended for the mic inputs. However, if this results in audio that is too low or too high (as heard by a far end caller), adjustments to the telco TX gain should be applied as needed.

»» NOTE: Use a standard handset on the far end for testing, since levels can be unpredictable from speaker phones, cell phones, and amplified headsets.

»» NOTE: When using a 3rd-party conferencing bridge service, the bridge has its own audio processing. As a result, it is often necessary to adjust levels to the bridge differently from levels on a point-to-point call.

It is important to understand that the CONVERGE Pro needs to receive a strong, line level signal from the currently connected source (audio switcher, video codec, DVD player, etc.).

»» NOTE: Make sure this input has been configured as a line input. If you have not already done so, go the channel properties for this input, right-click, and choose “Configure as Line Input.” This should disable PPWR, AEC, NLP and Gating, although the “Gate” light will remain lit.

1. Start by checking the signal at the pre-gain meter. This should be as close to 0dB as possible. If this is too low (-5dB or more) or too high (peaks greater than +6dB) you will need to adjust the gain at the source (audio switcher, video codec, DVD player, etc).

2. Adjust the coarse and fine gain as required to achieve a nominal level on the post gain meter.

3. If the same principles of unity gain have been applied to all inputs, crosspoints, and process or fader busses, then the line output to the amplifier should already show a nominal level. However, it is recommended that the levels on this output level meter be checked to verify this.

When passing audio between a computer and a CP2 system via USB, these same principles of gain structure will apply. The USB RX and TX channels typically should be set around 0dB. The Playback and Record settings on the computer should then be set appropriately to allow for this. Care should be taken to avoid setting the computer’s Playback level too high resulting in excessively high gain levels on the USB RX of the CP2 system.

When audio is routed from a CONVERGE Pro line output to a video conferencing system input, the line output gain needs to be adjusted according to requirements of the input on the videoconferencing system. If the audio level to the VTC is hot enough to overdrive the VTC input, audio distortion can occur. This distortion can cause audio processing problems in the CONVERGE system.

1. User Gain Control - User control of room audio levels should be from within the CONVERGE Pro system. If the volume is controlled at an external amplifier or other external device, volume changes are likely to cause far end echo at least until the system re-converges.

2. Simplicity - Avoid complex gain structures. For example, avoid boosting the gain of the telco RX audio at one point along its audio path, then dropping it as another point, and boosting it again at a later point. Also avoid unnecessarily complex audio routing, such as routing an audio signal through multiple busses.

3. Order of Optimization - We typically recommend optimizing gain in the following order:

»» NOTE: Make sure that this mic uses a Custom Reference for AEC and that this mic’s audio is excluded from that reference.
Here is the recommended method for configuring voice lift:

1. Route the mic input to a process bus using a purple, Pre-AEC, crosspoint

3. Route this process bus to an amplifier or speaker output

4. Adjust the gain level of the voice lift using this process bus.

»» NOTE: Do not use the mic input gain settings to adjust voice lift volume levels. Instead, make sure that the mic inputs gains have been optimized as explained above. 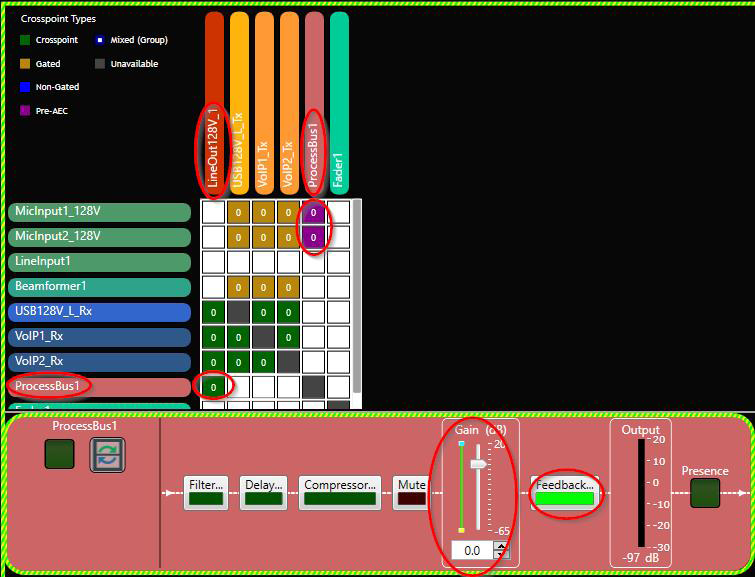 5. Begin to slowly increase the gain level of this process bus until you start to hear the mic ringing or feeding back into the speakers.

6. Once you find the gain setting where the mic first starts to ring or feed back, reduce the gain by about 6dB to prevent feedback. This typically will be the optimum gain before feedback.

To increase the maximum gain before feedback, use the Feedback Eliminator. Go to the processing block and run the feedback eliminator setup, as follows:

1. Adjust the gain of the processing block until you start to get a little ringing or feedback, then revert back a couple of dB.

2. Set the Optimum Gain Before Feedback to 3 or 4dB, or possibly a little higher. 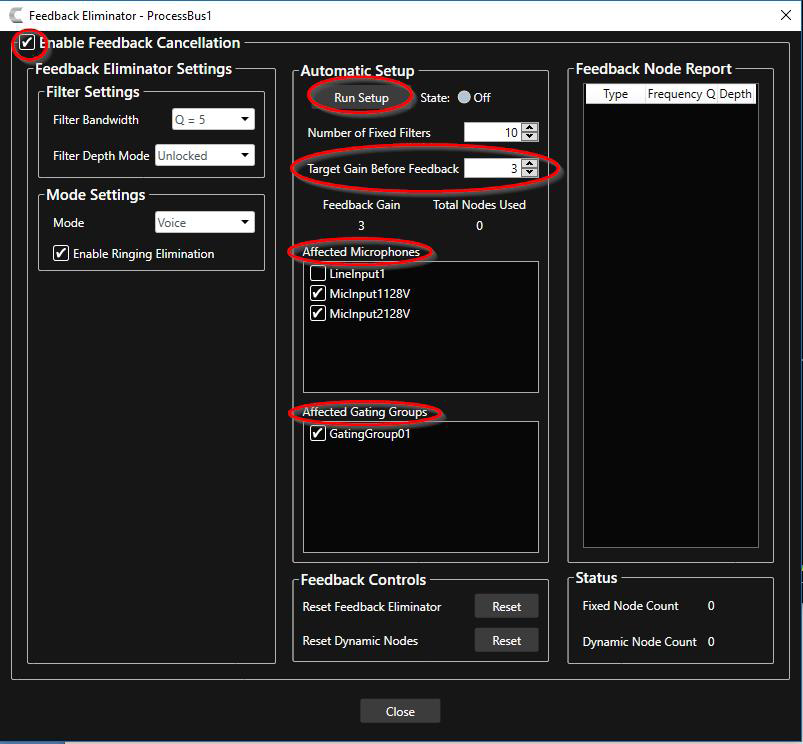